While most of the people who just got into the world of music are focused on super popular instruments like the guitar or the piano, there are still those who are pretty fond of bowed string instruments. This is why we decided to cover this topic to some extent and see to bring you a condensed beginner’s guide to cellos. We’ll cover some of the basic topics when it comes to this instrument, and we’ll also share a brief list of what we consider to be the best cellos for beginners.

One of the biggest discouragements for starting to play the cello could be the misconception that this is a robust instrument only for those who are tall enough for it. However, there are six basic cello sizes, all of which are focused mostly on the player’s height and age. From the smallest to the largest, these go 1/8, 1/4, 1/2, 3/4, 7/8, and 4/4 (full size).

Note: Cello sizes are measured between the two furthest points on the back side of their bodies.

It’s important to note that these are not strictly defined, and everyone is allowed to choose what suits their needs. However, it’s always a good idea to ask an experienced cellist or a teacher for advice. This would be the best way for any beginner to approach this.

We would also like to note that the 7/8 cello is not that common compared to other types, but it’s pretty useful for adult players who are not comfortable with the full-sized instrument.

How Many Strings Does a Cello Have

Standard cello, also known as violoncello, has four strings. Like on all of the other bowed instruments, strings are arranged in such a way that it makes it easier to use a bow on it. The standard tuning for cellos goes C, G, D, and A. This is typical of bowed instruments as they’re usually tuned to all perfect fifth intervals.

There are some other “unconventional” versions of cellos with more strings, most notably 5-string ones. In some cases, you’ll also find 6-string electric cellos, but these are pretty rare and are mostly built as custom instruments. The standard is four strings.

How to Hold a Cello Bow

When starting to play the cello or any bowed instrument, one of the crucial things is to learn how to hold a bow. The first thing we need to note that, unlike the guitar, cellos are usually played only right-handed. This means that you’ll be using your left hand for pressing on the strings on the fingerboard, while you’ll use the bow in your right hand.

The first thing you’ll want to do is open your right palm, face it upwards, and completely relax your hand. Just your natural, relaxed, and tension-free hand position. Then using your left hand, place the so-called “frog” of the bow (the base) into your right hand, with the rest of the bow being on the right side (away from the cello). The bow should rest on the second knuckle, with the tips of the fingers staying free. After this, slowly and naturally curve the fingers inward, towards the bow.

After this, put your thumb right where the frog meets the stick. It’s also important to place the fingers comfortably, with enough space between them. Don’t squeeze the bow, don’t keep the fingers too close together, but also not too stretched. Like we explained, it should be your comfortable natural position.

The pinky finger should be at the center of the frog (the eye), the ring finger should rest right where the frog meets the bow, the middle finger is on the bow itself, while the index finger barely touches the bow.

Another thing you’ll need to note is that thumb should be a little bent. It’s not a good idea to keep it straight as you’ll lose flexibility and will just tire your hand after a while.

In the end, no bow grip is exactly the same. These are just some general rules, and your hand position won’t usually look like anyone else’s.

It’s also important to position your hand with a downward slope from your shoulder and down to the elbow. The shoulder should be relaxed, but not too loose. If you sit straight, you won’t have issues positioning your shoulder and the arm.

After you’ve found your position, then slowly start bowing one of the strings. Move the bow left and right at a steady constant speed. It takes a while to get used to it, but just be patient.

At the first look, violin, viola, cello, and double bass look pretty similar. One would say that they’re just like one another, only varying in size. However, the most important difference includes the register that they cover, the tone they produce, as well as their role. The common thing is that they all have four strings and are all fretless instruments, at least the conventional versions of these instruments.

The violin is the smallest one and covers the highest register of the four. It’s held on the shoulder (except in some cases, but that’s rare), pointing to the left-hand side. The tuning is G3, D4, A4, and E5. The violin is often regarded as the solo instrument, although it serves as a backing one as well.

Viola looks like a slightly larger version of the violin. The main difference is that it goes five semitones below the violin. So the tuning is C3, G3, D4, and A4. It usually serves as an accompanying instrument, especially in standard string quartets. It’s not as popular as the violin, but it can also have a soloistic role in some orchestra settings. It’s also held the same way as the violin.

Cello’s register is exactly one octave below the viola. So it’s C2, G2, D3, and A3. Since this is a larger instrument, cellists play it sitting down, with the instrument sitting between their knees. The most interesting thing about it is that it covers such a spectrum that it can be used as both solo and accompanying instrument. There are entire repertoires for cello as a solo instrument, as they produce a very unique sound.

Double bass, or often referred to as just the “bass,” is the largest of all stringed and bowed instruments. Quite often, bass players perform it standing up, although the conventional way is by sitting down. The tuning is quite different, not only due to going lower than other stringed instruments, but because it’s in perfect fourth intervals rather than fifths. The standard tuning for double bass is E1, A1, D2, and G2. This is exactly the same as what you would find on most of the standard electric bass guitars.

Now that we’ve covered some basics, we figured we could look into the cellos out there and see what the best choices are for beginners. Of course, there’s an abundance of great cellos out there, but we believe that these five are just the perfect pick for anyone who’s starting out. 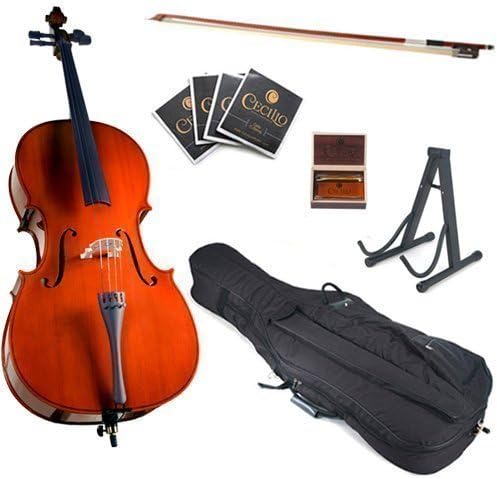 Cecilio have some pretty great classical instruments, mostly focused on beginners and intermediate performers. So it’s not surprising to see their cello on this list. The CCO-100 is their standard student cello, focused on older students as this is a full-sized instrument.

First off, it features a body with spruce top and maple sides. As far as the neck goes, we also have maple here, and the same thing goes for the fingerboard. It comes with a high luster varnish finish. It’s available both as a 1/8 and as the full 4/4 size version.

With the cello also comes a nice package. Aside from the quality padded bag, you get a set of strings, Brazilwood bow with unbleached horsehair, and a cello stand. That’s a pretty good deal for such an instrument. 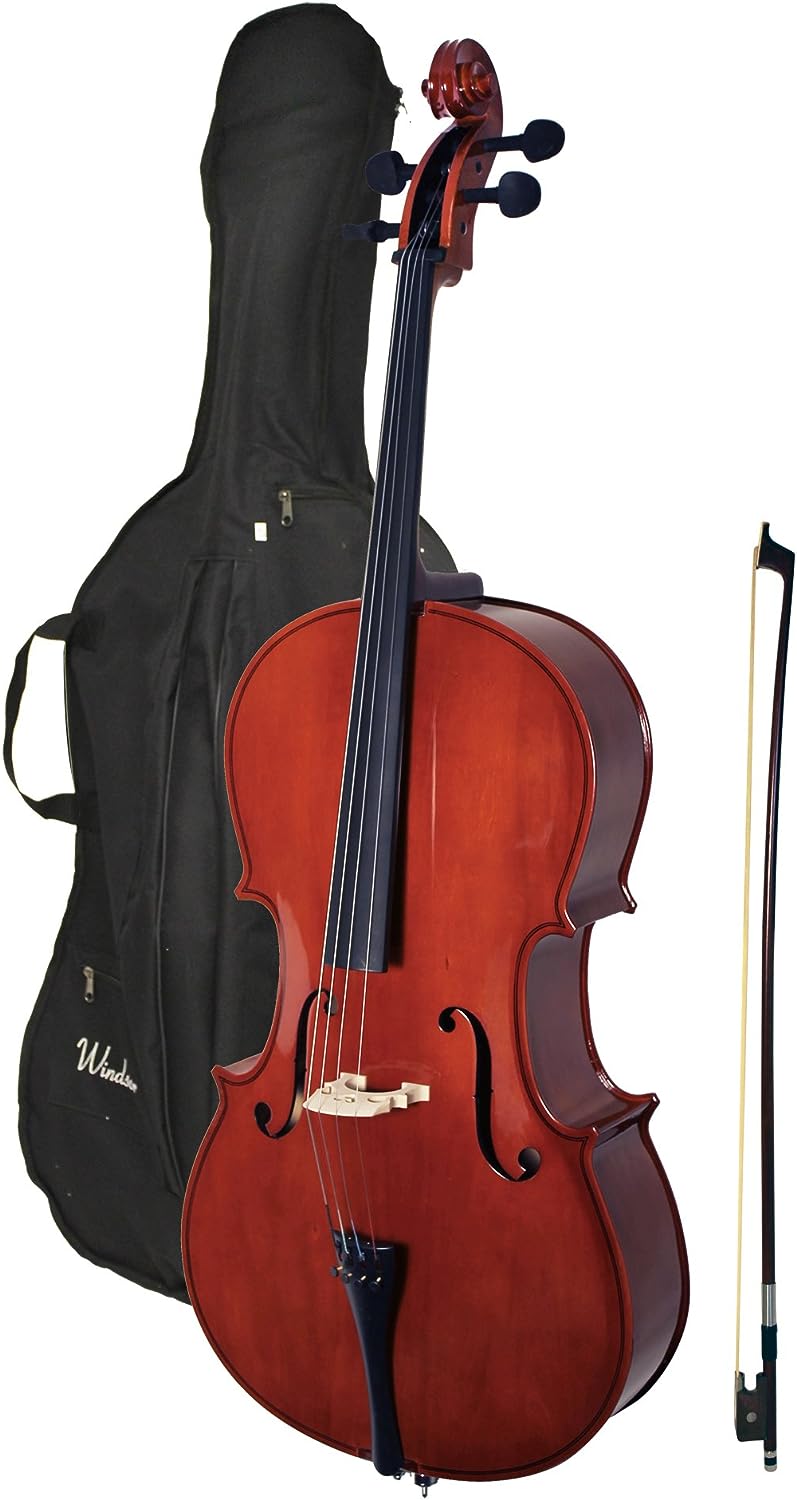 While we’re at this list of great beginner cellos, Windsor is another one of brands that comes to mind. So here we’ll include their MI-3006. Just like the Cecilio one that we described above, this one also has a spruce tonewood on the top side, as well as the maple neck, maple sides, and the maple fingerboard. What’s also interesting is that it comes with a spike that has an adjustable height.

This is a full-sized cello, meaning that it’s intended mostly for ages 15 and up. However, it’s not unusual to see it used with even some younger students that need a larger instrument. It also comes with a padded bag, so that’s useful as well.

Now that we’re covering beginner cellos, there should be some mention of those smaller instruments, which are suitable for younger ages. One of the examples comes with Cremona and their SC-165. Now, what you need to bear in mind that this one is substantially more expensive compared to the other cellos that we mentioned.

We have all quality materials and selected tonewoods for this cello. Made in California, USA, it’s set to high-quality MENC standards. Materials used here are maple and solid spruce. This all results in a great tone, something that you would expect even of higher-priced instruments. The whole thing is rounded up with its oiled neck, as well as a balanced bow. This is what makes it very comfortable and easy to play. With this being a 1/2 cello, all this makes it a perfect option for younger players who are very serious about becoming great cellists. 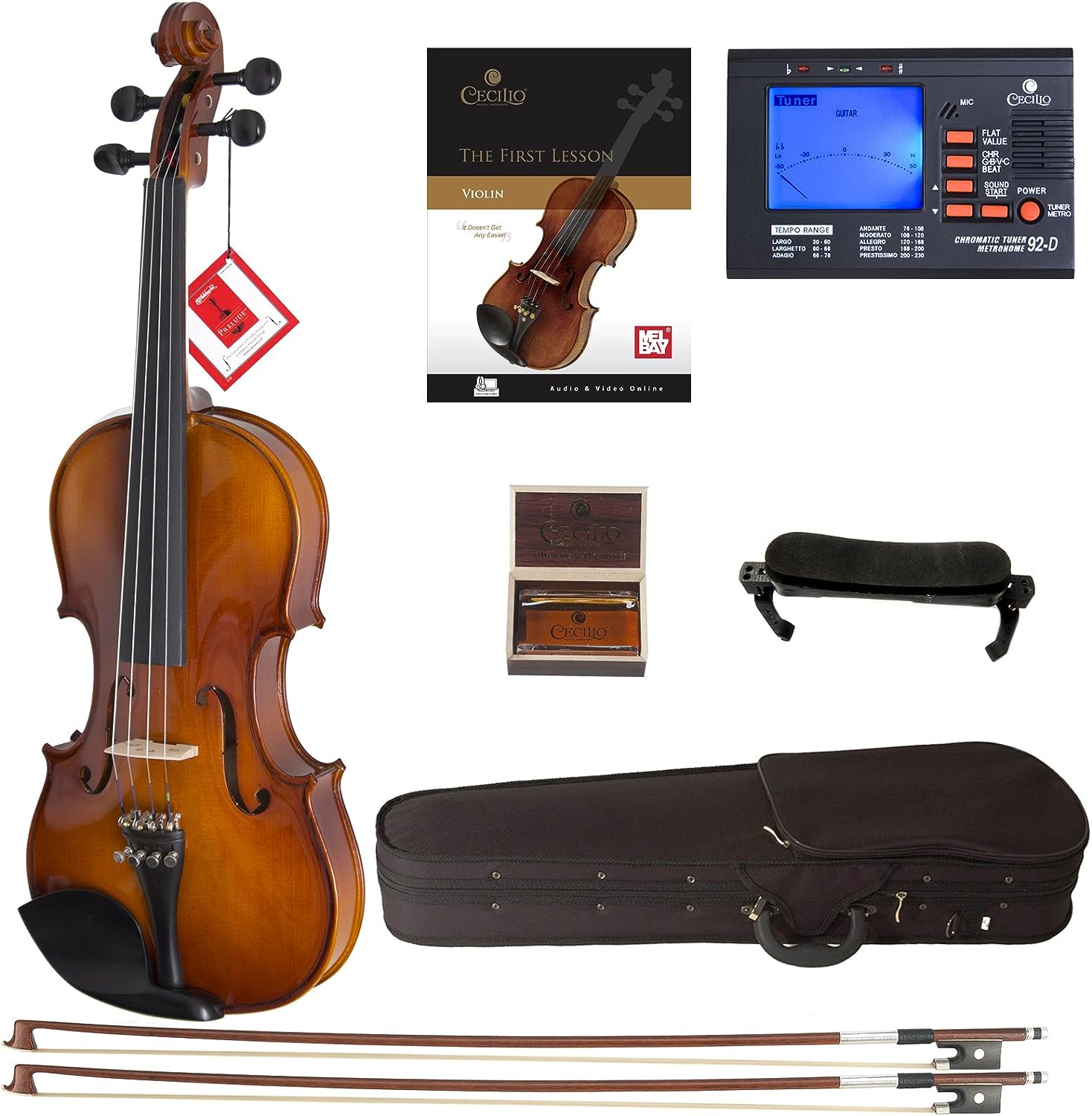 Since Cecilio have so many great things to offer, we decided to include another one of their products here. It’s the same CCO series, this time CCO-500. This is a full-sized cello with the top made of dense spruce tonewood. Meanwhile, the sides are made from maple, as well as the neck, the backside, and its neck. All of this is rounded up with a great design with a golden brown finish.

When it comes to the fingerboard, it’s different compared to the other cellos on this list. Here we have a quality ebony wood, which is the same material used for the tuning pegs, and its tailpiece. What’s really exciting is that you won’t really find a cello of this price with an ebony tailpiece.

It also comes with a brazilwood bow with Mongolian horsehair. All of these great features make it a very great deal for the price. You won’t find an instrument that’s such a good deal. 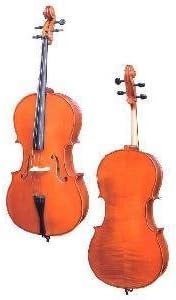 Last, but not least, we would like to include one D Z Strad Student Cello 101. What’s interesting about it is that it’s praised for its versatility and implementation both as a solo and an accompanying cello.

Once again, we have spruce top, maple sides, and maple neck. But just like CCO-500 we described above, it features an ebony fingerboard, which is a great addition for a beginner’s instrument.

As we said, it’s not hard these days to find a good cello for beginner and intermediate levels. You’ll need to pay attention as to what you need, most notably the size. Any of these cellos will definitely come in handy for the purpose, and present a good transition to some higher quality professional or semi-professional cellos. All that’s left to do now is practice and become good at it.