Formed by Torakusu Yamaha back in the second half of the 19th century,  the company bearing the founder’s second name has come a very long way. Although it branched off into so many directions, building machinery, electronics, and even motorcycles, their music roots can still be seen in the logo that represents three tuning forks.

Over the past few decades, they’ve become fairly popular for their keyboards. Whether we’re talking about professionals or beginners, everyone is familiar with Yamaha. Knowing they’re still one of the biggest names in the industry, we’ve decided to do our search for the best Yamaha keyboard out there.

However, the choice was not easy, so we compiled all the results into a brief list of what we consider to be the company’s finest keyboards. At the same time, we did our best to add something for everyone’s needs and tastes. Of course, there’s not a universal way to measure quality, but they’re sorted according to their features, sound, and functionality. So here it goes.

Yamaha’s MODX8 was derived directly from the company’s very successful MOXF series. Now, this is a fully professional piece, intended for some very advanced tone shaping and performances. The first thing we notice is the inclusion of 88 keys. In the series, we can also find exact same versions only with 76 and 61 keys, which are MODX7 and MODX6. Now, what’s really exciting is that all the keys are fully weighted, making it feel as if you’re playing the piano or an old school synth keyboard.

Similar to some other of Yamaha’s products, like Montage 8, here we have the company’s Motion Control Synthesis that takes control over FM-X and AWM2 sound engines. Thanks to this particular feature, MODX8 is more than just a regular digital instrument with presets, but rather a mean machine for music creation and some very versatile sequencing.

There’s also a so-called Super Knob that’s able to control multiple different parameters at the same time. It’s a very useful tool that allows you to push the instrument over its limits. There’s also an option to use the feature through external controllers or expression pedals.

Among the countless sounds, MODX8 comes with two very convincing sampled grand piano presets, Yamaha’s own S6 and CFIIIS. Overall, it has over 1100 different preset voices and around 70 different drum kits. Most of the instruments are all pretty persuasive and realistic.

It’s also worth noting that the keyboard has an integrated audio interface, which makes it a great workstation for any type of recording. It comes with four individual channels in the formation of one stereo input and two mono inputs. There’s also an option to send 10 different channels, plus there’s also an option for 16 MIDI channels through the USB connection. It’s a pretty versatile and useful professional or semi-pro piece.

We decided to include Yamaha’s Reface CS for the reason that it’s one of the best compact and portable keyboards of all time. And, most importantly, this is an analog keyboard. If you’re a fan of the old school type of synths, this is the one that you’ll want to get. This polyphonic 8-note keyboard comes with six types of oscillators, so we have Yamaha’s Pulse, Oscillator, Multi-Saw, Ring Mod, Sync, and Frequency Mod.

We can also find four different onboard effects. We have VCM Phaser, VCM Chorus and Flanger, Distortion, and Delay. What’s more, there’s also an onboard looper, so it’s pretty clear what the main idea is here. You can make a full analog show on your own with just this one simple instrument. Yeah, it has only 37 keys with action, but it can be more than a great addition to any setup.

Also, aside from the polyphonic mode, Reface CS can be used as a mono instrument and deliver some pretty beefy synth tones that cut through the mix. Going further into it, you can find two speakers on it, in addition to the regular output.

It’s a very light piece, weighing just enough that you can take it anywhere with you and make music on the go. And although it’s an analog keyboard, it can be utilized as a MIDI controller through its USB or MIDI outputs. It also supports connectivity with external foot controllers for more functionality.

However, it would really be a shame not to use its analog potential through audio output. Yes, it’s a very specific instrument and not something for everyone’s needs, but certainly the best Yamaha keyboard at the moment for those lovers of true old school analog synth tones. 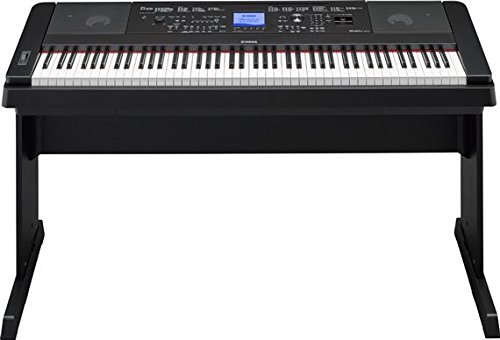 Now going over to some of the more modern and conventional stuff, we’re including the company’s DGX-660, one of their most famous digital pianos. The idea behind this particular keyboard was to have a very realistic replication of some famous piano tones. The whole thing is rounded up with fully weighted keys that give out some pretty convincing piano feels.

To be honest, only a professional would fail the blind test on this one. Especially when it comes to the overall feel of the keys. And it’s not even that expensive compared to some other digital pianos out there. They come with the special GHS weighted action, meaning that Yamaha put more weight in the lower register, and made it lighter as you go up to higher keys. This is exactly the feel you’d get on an actual real piano on all of its 88 keys.

There are so many features on this one that would require a review on its own. This digital piano comes with its own display for sheet music and lyrics of MIDI songs, and it’s possible to pair it with iOS devices through the wireless connection.

The built-in speakers are pretty great and offer great response and control over one’s playing. However, you can also use any kind of audio outputs, as well as the integrated USB audio interface for recording in any standard DAW.

But the most important thing here is that it comes with Pure CF Sound Engine and some of the best sampling practices. After all, Yamaha dedicated years and decades to developing their digital pianos, allowing great dynamic response for maximum expressiveness. DGX-660 is more than a great alternative to actual pianos.

Whether you’re a beginner or an already experienced pianist who’s looking to save some space and funds with a digital piano, there’s honestly no need to look further from this one. In addition, you can also buy it all together with a furniture stand, the specialized pedal set, and a padded piano bench. So what are you waiting for?

Another mind-blowing keyboard with the Super Knob feature like we saw with MODX8, that allows players to create very dynamic sounds by controlling multiple parameters at once. You can only imagine the world of possibilities that opens up here. Aside from this, we also have the Motion Control Synthesis Engine that we mentioned for MODX8.

However, Montage 8 is a far more superior instrument, which can also be seen on its price tag. This powerful workstation comes with PAC, or Pure Analog Circuit, which helps improve the signal quality when it’s converted from digital to analog in the output. You can just imagine how great some of the old school-styled synths which are available through the impeccable FM-X engine thanks to this analog circuitry. After all, the engine features 128-note polyphony, so there are countless possibilities here.

We can also find other features like the Virtual Circuit Modeling, the Motion SEQ, the company’s special envelope filter, and even a great range of grand piano samples that sound like the real thing with proper PA systems.

The keys are not weighted the same ways as with the MODX8. However, this is not a downside in any way, just a different approach to performance. Nonetheless, the action is pretty great and you’ll have complete dynamic and sonic control over the output thanks to Montage 8’s impeccable sensors.

To put it simply, this is a beast of a keyboard. However, this is an extremely expensive product. It’s not something we’d recommend for beginners, intermediate players, nor even semi-professionals as it costs as much as a good car.  There are also cheaper versions with fewer keys, Montage 7 and Montage 6, but even those are pretty high-priced. With such a great tone, features, and DSP effects, it’s not really a surprise. 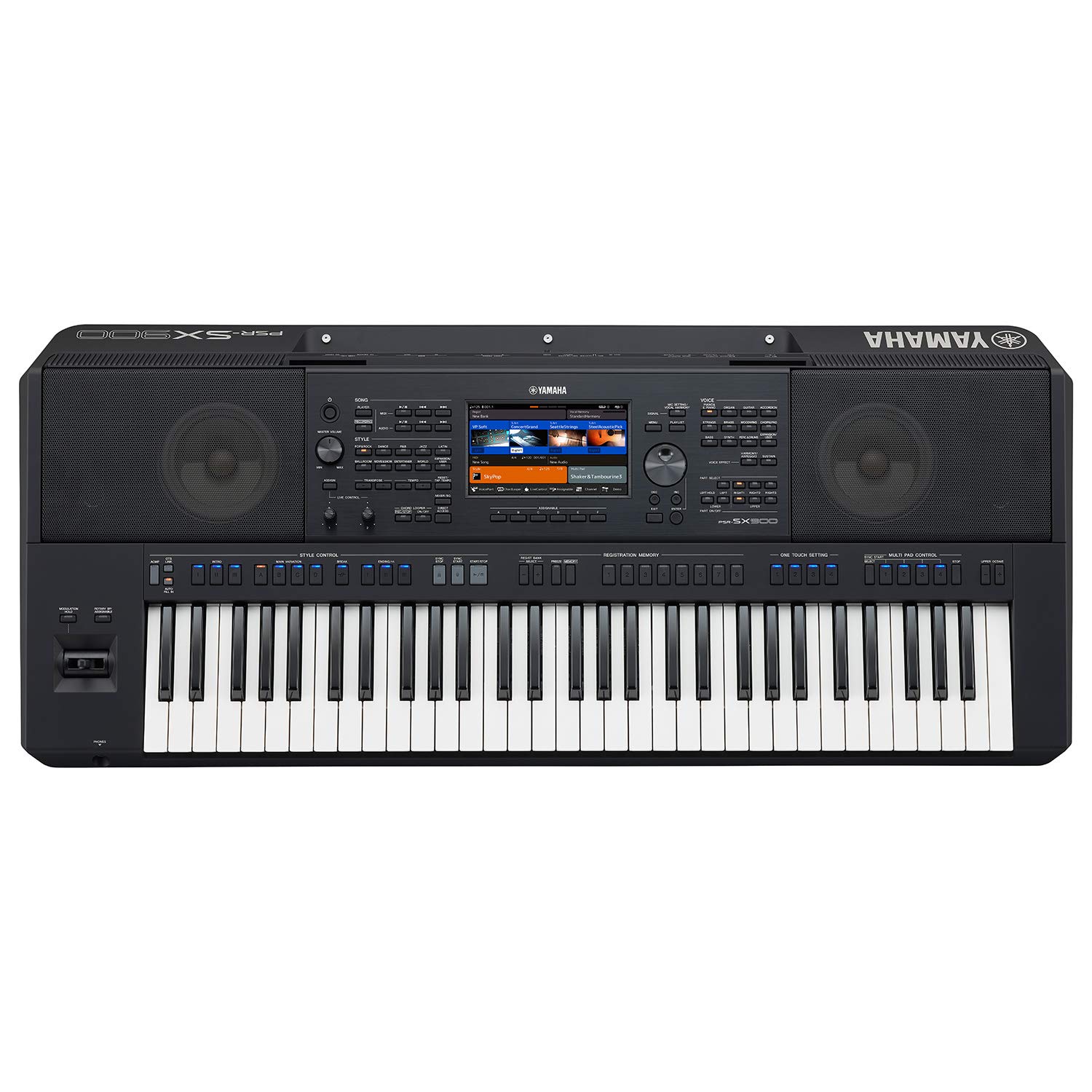 Another impeccable piece, here we have PSR-SX900 workstation and arranger. While there are many arrangers out there for the “one-man-band” type of performances, barely any of them comes close to what this Yamaha’s piece is capable of. Which is not a surprise as it’s the flagship model of the PSR-SX Series.

This powerful piece gives a hands-on approach in performance and even songwriting thanks to its intuitive interface. Along with the chord looper, vocal harmonies, and Style Assembly, you’ll be able to create whatever your heart desires right there on the spot. More functionality comes with its joystick that controls pitch and modulation control. Real-time controls also provide players with the functionality of any classic analog synth. The possibilities are just limitless.

It comes with 1337 voices on it, as well as 56 different drum kits. There are also 525 style presets that allow easy operation straight out of the box. There’s a total of 4GB memory storage, plus 1GB for expansion. What’s more, there’s also an additional line input for a guitar or a microphone for additional performers.

It would take a lot to go through all the additional features, presets and sound effects on SX900. But even if you’re not experienced enough, it’s pretty easy to use with the style presets without creating any of your own. Synth Vocoder, Vocal Harmony, Yamaha’s Expansion Manager, as well as connectivity with external controllers for more parameter control – it’s all available with this arranger and workstation. What’s more, it comes with a pair of pretty great Expansive Soundfield Speakers which come in handy for smaller performances, as well as practice and writing sessions.

Although not expensive as Montage 8, it’s still a high-end piece intended for professionals.

What’s so Great About Yamaha’s Keyboards?

Among the countless brands that we can find today, there are only a handful of brands that we’d recommend for high-end users. One of them, of course, is Yamaha. But what is it about Yamaha that would make it stand out from the rest of the exclusive products there.

What we would point out is their reputation, that’s certainly deserved. For decades now, they’ve been building great stuff in all price ranges. Even a simple entry-level keyboard or a guitar will exceed all expectations and there’s a slim chance you’ll have any unexpected surprises with them.

Different brands and manufacturers will often focus on certain types of keyboards and have something very specific for beginners, intermediates, or professionals. However, with Yamaha, they offer quality in all of these three categories and have specialized in all areas. What’s more, some of the mid-level keyboards will even feature engines, functionalities, and features of more expensive models.

Another great thing about Yamaha keyboards is the ease of use. For instance, arrangers like SX900 will be accessible to even some less experienced musicians. The interface shown on display is very easy to navigate, especially with all the additional controls. What’s more, you’re able to freely navigate through all the features and change effects while you perform.

To sum it up – accessibility, build quality, and value for the money in all the price ranges are the three main reasons why you should always consider Yamaha keyboards over other brands.