If you’re buying a guitar from a shop, there’s a good chance the shop assistant will tune it then and there for you. You’ll have a good week or so of the guitar staying in tune if it’s got a decent bridge. However, most beginner guitarists can be a bit heavy-handed, which means the strings will detune very quickly.

Even if you’ve been making good progress with your learning up to this point, things will start sounding wrong, and you may even start to feel defeated. Before reach this point, before anything else, in fact, learn how to tune your electric guitar.

Most six-string electric guitars are tuned via a set of six tuning pegs or machine heads as they are commonly known. These are either set on one side of the headstock or three on each side – three for the treble strings (the thinnest) and three for the bass (the fatter strings wound with steel).

Some electric guitars have more complex systems of tuning. Of note are the Floyd-Rose or Wilkinson locking tremolo systems, that combine tuning pegs for tuning in tones and semi-tones and the screw-like bridge tuners for extra precision. Though these systems are vast improvements on the standard systems, they are designed for more advanced players who make good use of the whammy bar.

Happily, most beginner electric guitar bundles often come with an electronic tuner. If yours didn’t, it’s worth investing in one (they are generally fairly cheap). 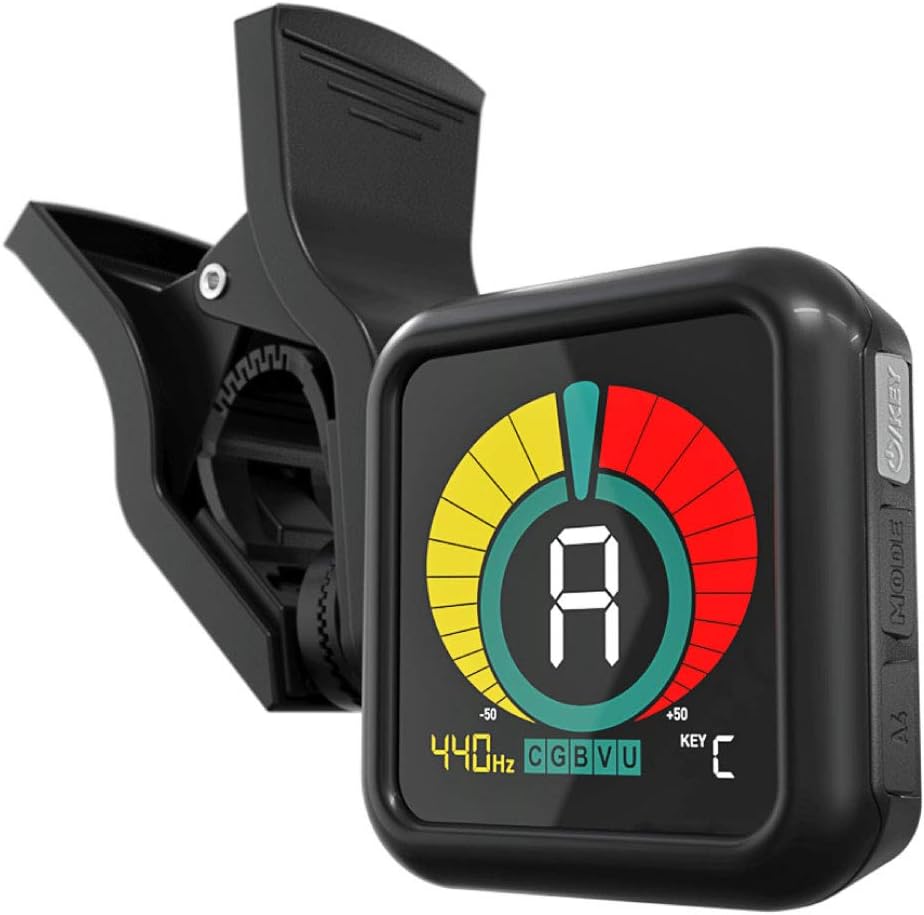 Professional Clip-On Tuner for All Instruments – BUY THIS PRODUCT

Most modern electric tuners will have in-built microphones which pick up the frequency of your strings as you play them and tell you what note they vibrate at. They will tell you via an LED gauge how close it is to the note you are seeking. Tuners are programmed to standard tuning, but you can change the program to a variety of tunings if you wish.

However, it is important to note that if you are tuning a guitar for the first time, you should always start off with standard tuning. Most electric guitars are built with standard tuning in mind. This means that if you tune a guitar up too high, you may end up warping the neck, either rendering the guitar useless or incurring some expensive repair costs.

How to Tune the Guitar without an Electronic Tuner

Even if you don’t have a tuner, it is a good idea to have something that makes a note, whether it’s a Youtube tuning video (there are tons of them) a keyboard, or a sequencing program. However, it is also of the utmost importance that the strings are in tune with one another. Here is the standard, time-honored of tuning a guitar.

Generally speaking, it’s a good idea to start with the highest string, otherwise known as the 1st string, the furthest away from you as you look down across the strings. This is the string most likely to break if you overtune it, and all other strings should be tuned up towards its pitch. Once you have the high E in tune, you can then start to tune the others.

Every string has a correlating fret position on other strings. For instance, if you strike the first string and fret the second string on the fifth fret there should be no difference in the sound or pitch. If the second string is out of tune whilst fretting on the fifth fret, you’ll hear a series of ‘cycles’ which will slow down the closer the string is to being in tune. In order to tune the string, turn the tuning peg up or down. It’s a good idea to play it open and re-fret the fifth when you’ve tuned it, checking back and forth as you go.

Once the fretted second string sounds the same – congratulations! You just tuned your second string. You should now repeat the process as you work down the strings, each time playing the string above it in unfretted.

This is the standard tuning that most guitarists first learn to play in. There are, however, other tunings which have become very popular amongst rock, blues, and folk musicians.

Used by grunge and metal guitarists, this tuning allows you to play power chords on the bass strings without straining your fingers. It follows the same pattern as above, except for the 6th string.

A little more complex, there are various types of open tuning, often favored by blues guitarists who use a slide. Again, each string should be tuned in conjunction with the string above it. Here are a couple of open tunings:

This is by no means an exhaustive list of how to tune an electric guitar, but once you’ve mastered the techniques, you can start to experiment by yourself. As a beginner, you should not limit yourself to standard tuning. Some of the finest guitar players, such as Joni Mitchell and Jimmy Page, often found it easier to play in alternative tunings.

When you’ve mastered the art of tuning a guitar, you’ll open up a world of possibilities in terms of style and creativity.