While most of the younger music-loving population will immediately jump on to play instruments like the guitar, the drums, or the keyboards, there’s still some magic to wind instruments. Most notably, the clarinet comes as a pretty diverse one, as it finds its place in classical music, different movements within jazz, and even some pop or rock bands. Be that as it may, the instrument is often associated with virtuosity, with many famous players inspiring musicians that play other instruments as well.

But clarinet itself is not exactly a simple instrument. Although apparently straightforward, it requires one small and simple component in order to work – a mouthpiece. Seemingly just a random little piece, it’s not only that you can’t play the clarinet without it, but it also has a huge role in shaping the tone of the instrument. And if you’re looking for the best clarinet mouthpieces for your needs, we’ve made things a lot easier for you and came up with a list that will help you find what you need.

To start things off, we-re looking into Vandoren and their CM4158 M13 clarinet mouthpiece. Now, this is more of a higher-end piece, which you can also see with the product’s price. First off, it comes with a profile 88 beak and it’s intended for Bb clarinets. The sound is pretty interesting, and it offers a lot of clarity in the higher register, providing players with enough punch in those areas.

Going over to its features, the mouthpiece’s tip opening size is 102, which is pretty usual for such pieces. Then we have a medium-long facing, and the mouthpiece works the best with Vandoren reeds that are right between the sizes of 3.5 and 5.

It’s important to note that the 13 series of Vandoren mouthpieces are intended to play in the standard A=440 tuning. Although this is pretty much a widespread tuning, any classical musicians still go by different rules. So you should get informed on this before deciding on a purchase. In addition, it’s a bit of a more expensive piece, so it’s usually intended either for full-blown professionals or just very serious and frequently gigging players.

With a list like this one, it’s almost impossible to avoid mentioning Yamaha or any of their products. For this purpose, we’d like to mention their 4C YAC1266 mouthpiece. The designation 4C means that it features a narrow tip opening, providing players with a pretty great dynamic response, as well as the overall clarity in tone. It might not be as bright in the higher register compared to the Vandoren one we mentioned above, but it’s still pretty clear.

But, in many ways, we can say that this mouthpiece brings a more “balanced” tone all over the audible spectrum. While some would say that this makes it less defined to some extent, it’s also something that makes it more versatile. It’s fairly reliable and, most importantly, the product is pretty consistent. When you buy a new one, it will sound and feel exactly the same as the previous one piece that you had.

The mouthpiece is made from a pretty high-quality phenol resin, which makes it durable in the longer run. Although falling into the more affordable category (not a budget one, though), it has a basic design after Yamaha’s famous Custom series. Overall, it’s a mouthpiece that we’d recommend for intermediate players, although it can come in handy for some of the more advanced settings.

Of course, Vandoren is another brand that we cannot avoid mentioning at least two times on this list. For this second mention, we have their CM308 B45 mouthpiece, which is another one for those traditional classic Bb clarinets. Originally designed by Bernard Van Doren himself, the company’s successor, it’s one of their most famous mouthpieces for clarinets.

CM308 B45 is intended as a fairly versatile and “universal” mouthpiece. It finds its way in not only classical music but also jazz and many other genres where clarinets are one of the lead instruments. It comes with a tip opening of 119.5. At the same time, it also features medium-long facing and has a traditional beak. According to the company, it works the best with their reeds that are in the strength limit between 2.5 and 3.5, although it can handle stuff above this limit as well.

It’s another one that falls into the more expensive category. However, it’s intended for professional players, so this doesn’t really come as a big surprise. Either way, you can’t go wrong with this one, no matter the genre that you’re playing or your skill level. 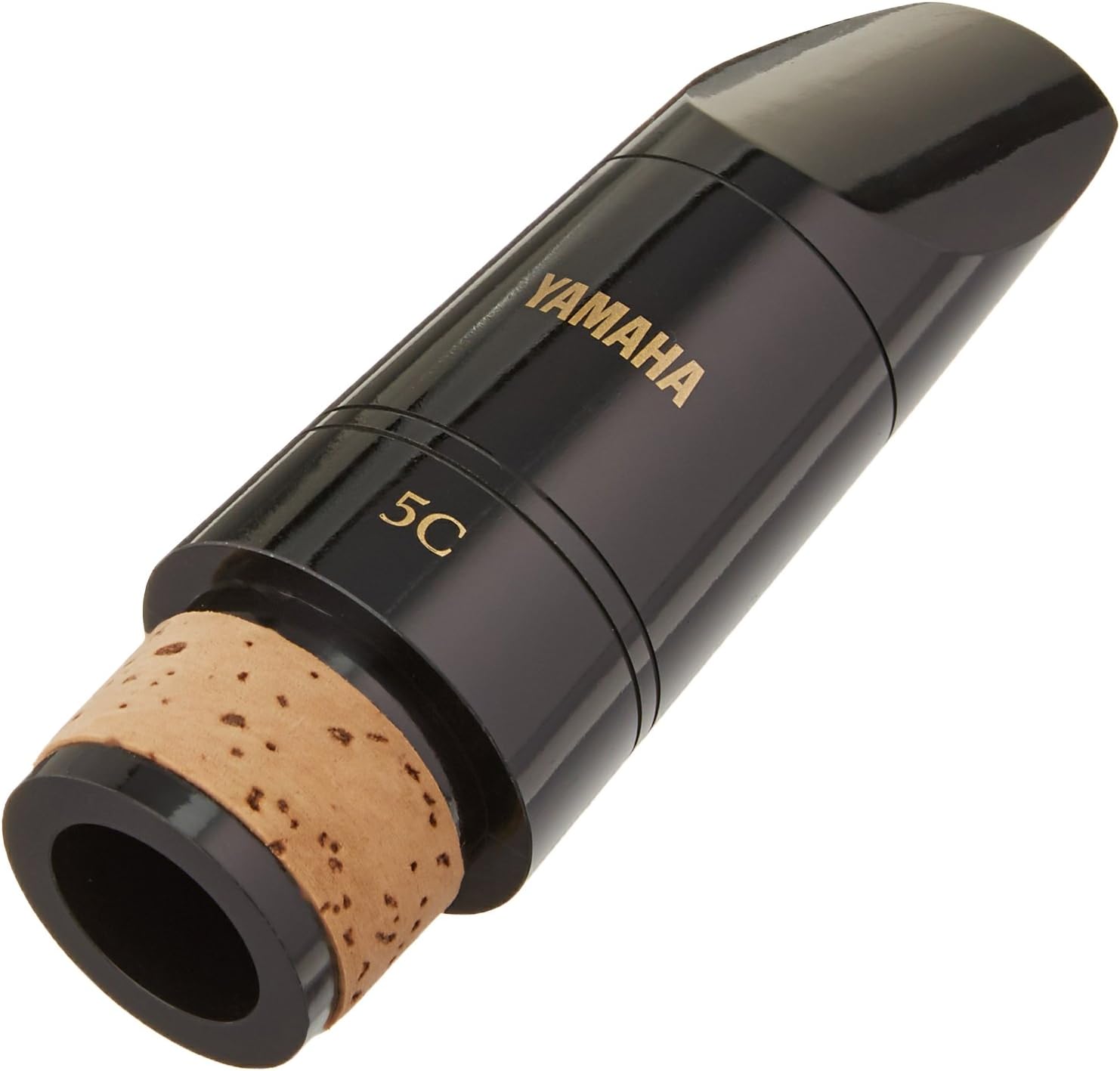 Since Yamaha is a big player in this game of clarinet mouthpieces, it doesn’t come as a surprise to see them once again on this list. Although similar at a first glance, their YAC 1267 5C is a bit of a different package. Although not really a high-end mouthpiece, it’s still more expensive compared to the previous one by Yamaha that we mentioned. The YAC1267 is a 5C mouthpiece. In many ways, 4C and 5C types have some similar features. But although they both cover the audible spectrum in a more distributed manner, the 5C type does come with more variety and can achieve more volume at its fullest potential.

And this is exactly what we get with YAC1267 from Yamaha’s Standard series. This particular mouthpiece is a great choice for pretty much any genre. And while YAC1266 that we mentioned is also versatile, it still cannot achieve what this one is capable of.

It’s also worth noting that it’s made from phenol resin of amazing quality. It’s also based on Yamaha’s Custom series and, what we can always expect from the company, we have an amazing consistency. If your repertoire palette includes many different genres, this is exactly the mouthpiece that you’ll want to check out. 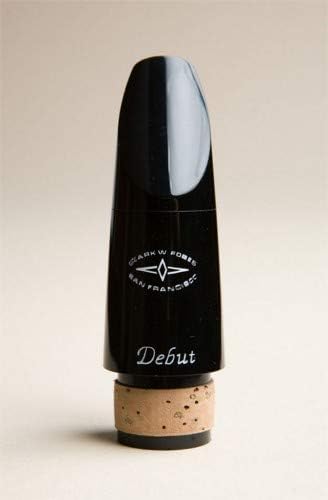 Now we’re going over to another cheaper mouthpiece, that’s usually the kind that beginners and intermediate players would want to get. We’re talking about clarinet component makers Clark W Forbes who are known for their clarinet mouthpieces and barrels. For this list, we’re including their Debut Student mouthpiece, which is – as its name suggests – intended for entry-level players.

And it’s a fairly cheap one. But nonetheless, you’ll still get a pretty great quality of sound and it will be pretty easy to play through it. These are all hand finished and play tested, so you really don’t need to worry about any potential unwanted surprises. If you’re a total beginner and need something to start, but don’t know what to go with, then this is the safest choice for a mouthpiece. You just can’t go wrong with it. 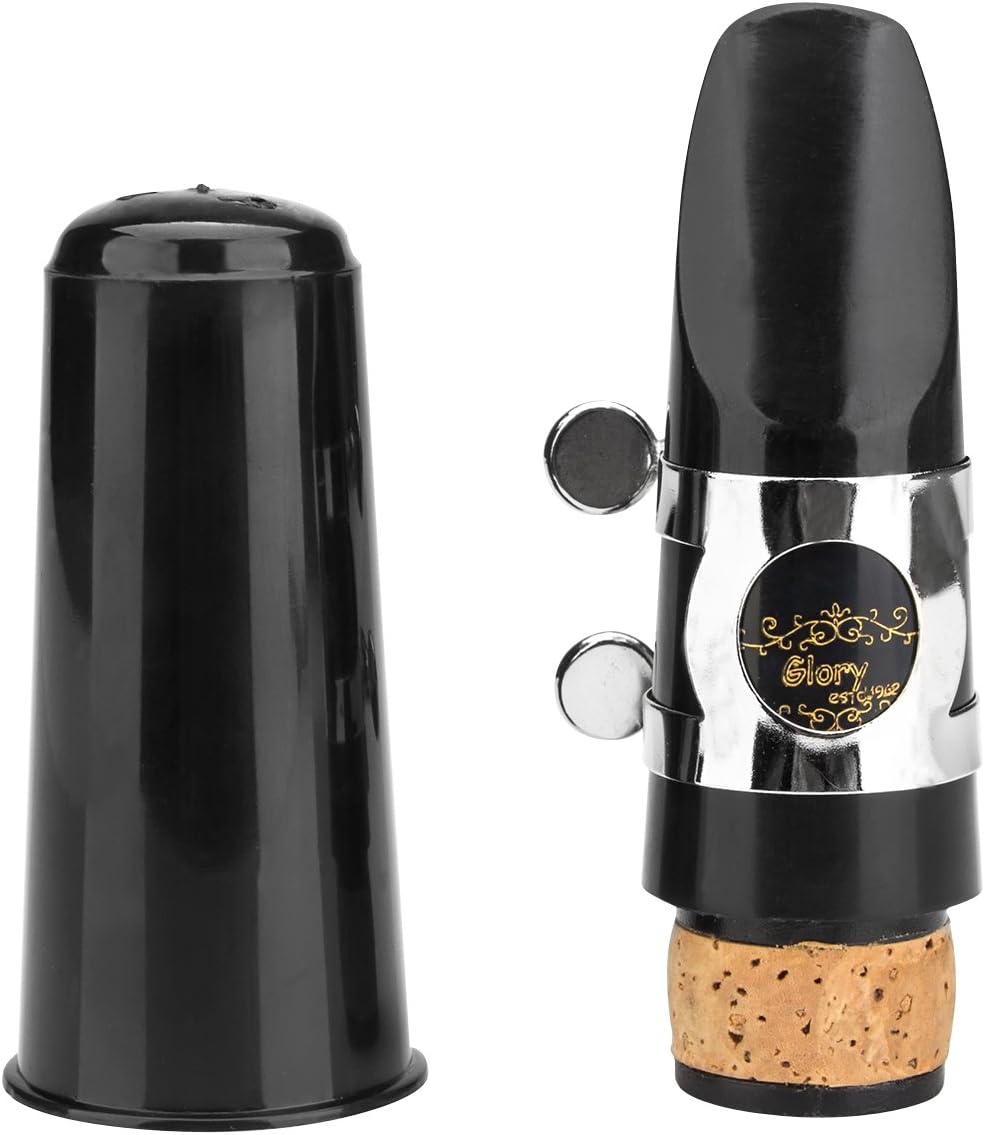 However, it’s always important to find a good budget option for this list. And this is exactly why we decided to look into Glory and their simple clarinet mouthpiece kit. Compared to other examples on this list, this particular package is way cheaper than anything we could find and that would still fit this category of great clarinet mouthpieces. Not much over the $10 mark, you’ll get a brass ligature, along with one reed and a plastic cover.

While many would immediately jump to consider it a mouthpiece for absolute beginners, it’s actually pretty decent for intermediates as well. And looking at its price, you can always have this one as a spare piece without having to spend a lot on just another piece of equipment.

Once again, we include a Yamaha mouthpiece. This time we’re looking into YAC CL4C, which is yet another 4C model. As we already explained, it’s well-balanced from top to bottom, giving an “even” distribution of frequencies. It’s not as loud as some 5C mouthpieces, but this one can definitely be heard.

This particular model is usually common with intermediate players, maybe some advanced players as well. However, we’d argue that you can’t go wrong with it even if you’re a beginner. It’s made from pretty decent resin plastic, and the overall build quality seems to be pretty good, making this mouthpiece a very reliable one. Other than that, it’s a pretty usual one and it fits any standard traditional clarinet. Although it’s versatile, we’d recommend it for classical players.

Lastly, we’d like to mention D’Addario and their MCE-EV10E-MB mouthpiece. Now, there just wasn’t any way to avoid it, and you can definitely see with its price that it’s a fully professional one. It has medium-long facing and features limited marble formula. This formation gives it great flexibility and it’s capable of getting very rich and powerful tones across all octaves. Thanks to its bore taper geometry and Revolutionary Ramp, you get a very defined tone and an amazing response. There’s really not much to say here, other than the fact that this is one of the best mouthpieces in the market today. If you want to go full professional, then get his particular mouthpiece and you won’t regret it. It’s a safe choice.

Of course, before you even decide on buying a mouthpiece, you’ll first need to get informed on all of the essential features. This is why we looked into the main traits and sorted out a few really important ones that should be your priority.

When looking into the basic features of any mouthpiece, the first thing that you’ll want to know is the tuning. This is not the thing that you want to mess, as it will completely change what you’re aiming for. However, most of the mouthpieces out there are in Bb, so there’s hardly any chance that you’ll go wrong. But still, just make sure that you’re purchasing the right one.

Although seemingly just a small random feature, the tip makes a world of difference for clarinet players. This is where the reed will meet the end of the mouthpiece, and it will impact the tone to a great extent. Tips are usually divided into two categories – closed and open ones. Having less resistance, a closed tip will produce a darker tone. Whereas with open ones, you’ll get a noticeably brighter tone due to its increased resistance. Beginners should aim for the medium-size opening.

Depending on many different features, we have five main types of clarinet mouthpieces. These are labeled as 3C, 4C, 5C, 6C, and 7C. And each of these will impact the tone and performance in its own way. For instance, the 4C has a somewhat “balanced” tone over the spectrum. Meanwhile, a 5C model will have the same trait but will provide more volume, at least in most of the cases. And, for instance, 7C models give you a more “piercing” tone that cuts easily through the mix.

Lastly, you should also think of materials that are used for making these mouthpieces. And the basic rules here are pretty simple – softer materials help produce darker tone while harder materials bring more brightness into the equation. But the most common material these days is resin, especially if we’re talking about entry-level or intermediate mouthpieces. Other examples also include ebony wood, hard rubber, and in some cases even marble. Most of the examples that we mentioned above are made of resin.

At the end of the day, it’s important to know that a mouthpiece will make a world of difference. It’s essentially the first component that gets in the way of your airflow. There are two main issues that will help you decide on the right mouthpiece. The first one comes down to the genre, or a scope of genres, that you’re playing. The second one is about your personal preferences and whether you feel like experimenting.

Now that you’re informed about it, go ahead and buy a mouthpiece that fits your needs and practice!