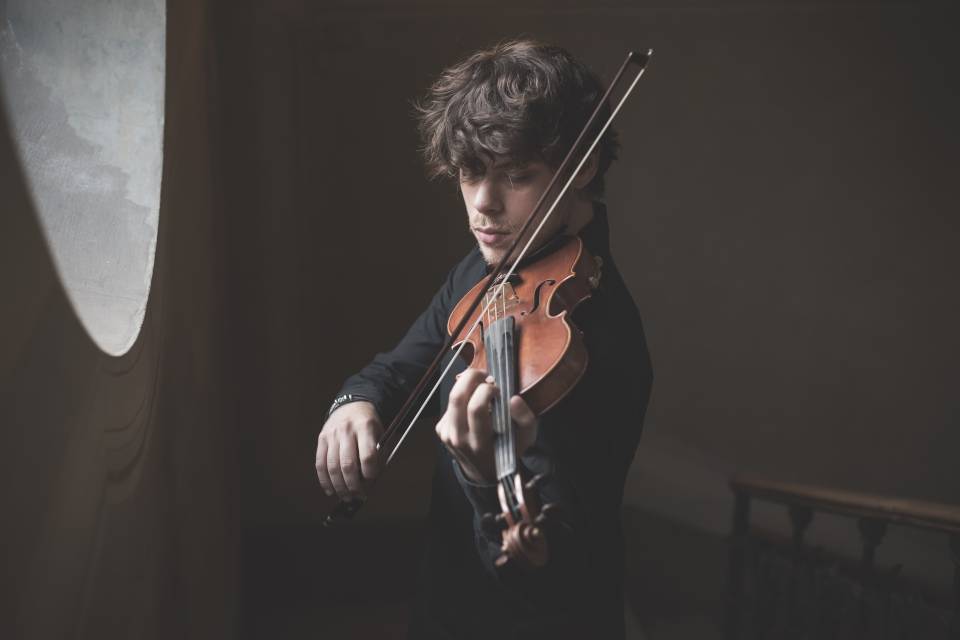 The history of violin playing is populated with overachievers, savants, and genius. While undoubtedly there are many great violin players who we will, sadly, never get to hear, below are some of the players we know have had a huge impact on the instrument.

Nicolo Paganini has been cited many times a benchmark in violin technique. Born in 1782 in Genoa, Nicolo first learned the mandolin from his father, before moving on to the violin at age 7. His talents were soon discovered by his tutors, and it is said that he very quickly surpassed them.

Though he had played for Napoleon’s sister, he was not very well known until his debut at La Scala in 1813. He would be honored by Pope Leo XII, and these days is revered for having established the violin as a solo instrument.

Joseph Joachim was for in 1831, in what was then part of the Kingdom of Hungary. After his family moved to Budapest, he began studying violin at age five with Stanislaw Serwaczynski, who was believed at the time to be the best violinist in the region. After showing a great deal of promise, he was accepted to the Vienna Conservatory and was taught by Joseph Bohm.

At only twelve years of age, he would debut in London at the Philharmonic Society, under the conductorship of Felix Mendelssohn. He would also eventually be paid a good wage by King Georg of Hanover in return for playing and conducting at state concerts. He would die in 1907.

The son of an Artillery bandmaster, Pablo de Sarasota was always destined to be a revered violin player. The legend goes that the very first time he picked up his father dusty violin he was able to play a passage of music perfectly. After a series of lessons, he would eventually be admitted to the royal court in Madrid as he developed as a musician. At age twelve, he would be sent to study in the Paris Conservatoire.

He became a favorite of Europe’s late nineteenth century composers, gaining favor with Bizet, Saint-Saens and even music critic and playwright George Bernard Shaw. After his death, works by Saint-Saens, Lalo and Bruch were dedicated to him.

Belgian violinist Eugene Ysaye is regarded as something of a legendary and enigmatic figure. It was said that the violin he played had supernatural origins and had been passed down through generations of his family. Whatever the truth of the story, there’s little doubt that he continues to command great interest and admiration, his compositions played to this day.

He was among the first to play for the Berlin Philharmonic before it was even known as such. Though his playing was legendary, a lot of modern violin playing is owed to his developed technique in teaching. As he grew older, he was known as an important teacher and conductor and, after turning down the New York Philharmonic, became the music director of the Cincinnati Symphony Orchestra in 1922.

6 Sonatas for Solo Violin by Eugène Ysaÿe and Oscar Shumsky

Austrian born Fritz Kreisler is known as one of the most expressive and unique violinists of all time. He studied in the Vienna Conservatory under composer Anton Bruckner and was also tutored in Paris by Delibes and Massart.

Disheartened by the refusal of the Vienna Philharmonic to admit him, he took a brief break from performing. However, by 1910 he had regained his position and performed the premiere of Elgar’s Violin Concerto. His last public performance was in 1947. As well as a virtuoso player, he was known also as a composer of operettas and even film soundtracks such as one for the 1936 movie The King Steps Out.

Born in Lithuania in 1901, Jewish-American violinist Jascha Heifetz traveled to the States in his teens. Having learned violin since the tender age of two, he had already played in much of Europe and Russia, eventually settling in San Francisco in 1917. Soon after, he made his debut at Carnegie Hall. He caused a stir amongst his contemporaries, with even Fritz Kreisler remarking that “We might as well take our fiddles and break them across our knees.”

Sadly, in his later years, his physical ailments forced him to curtail his performances and he focused on teaching and social causes instead.

The Magic of Jascha Heifetz

Born in 1908 in Ukraine, David Oistrakh was internationally revered for his extraordinary technique and tone. He began to play at age five and studied at the well-regarded Odessa Conservatory.

In the early days of the Soviet Union, he gave recitals throughout the state, including Eastern Europe. He would eventually teach violin himself and win the esteemed Eugene Ysaye prize. In the fifties, he would be one of the few Soviet players to be allowed to tour both the UK and the US. Posthumously, an asteroid, the 42516 Ostraich would be named in his honor.

The Very Best of David Oistrakh

A pioneer of jazz violin, Stephane Grappelli was born in Paris, 1908. At only 5 years old his mother died, and with the outbreak of the First World War, he was fostered by acclaimed American dancer, Isadora Duncan. It was with her that he began to enjoy French Impressionist music.

His subsequent years at an orphanage were spend in extreme poverty. He would, however eventually become well known as an important collaborator with Django Reinhardt. By the 1960s he became a much sought after session player and played with musicians as diverse as Pink Floyd, Paul Simon, and Yehudi Menuhin.

Born in 1916 to a Lithuanian Jewish family in New York, Yehudi Menuhin became one of the most exciting players of the 20th century. He spent his teenage years playing in Germany, even as the Nazi party began to rise. Before even his 20th birthday he had garnered a reputation as a master of the instrument.

In 1945 he accompanied the composer Benjamin Britten to a number of concentration camps to perform for Holocaust survivors. He also branched out from classical music and collaborated with the jazz violinist Stephane Grappelli.

The story of Papa John Creach is an unusual one for violin players. Born in Pennsylvania in 1917, he began playing violin in Chicago bars when he was 18. As a busker, he had to pick up many different styles, including classical. He was an early advocate of the electric violin in 1943.

Preach played with some of the jazz and blues greats, including Louis Armstrong, T-Bone Walker and, Nat King Cole. He would become a well-known figure in the 1960s and would join psychedelic band Jefferson Airplane, later Starship.

Born in Tel Aviv in 1945, Itzhak Perlman has overcome great odds to become one of the best-loved and recognized violin players in the world. In his earliest years, he taught himself violin, despite having been left disabled by Polio.

He was catapulted to stardom in 1958 having appeared on The Ed Sullivan Show and has ever since been a prominent figure. He has received countless accolades, including the Presidential Medal of Freedom in 2016.

From the illustrious musical family, Nigel Kennedy is one of the most well regarded and diverse violin players in the world. Known for ditching a traditional classical image, he nonetheless, was accepted into the Yehudi Menuhin School of music at 7, and later the world-famous Juilliard School in York.

At only 16, he appeared with the famous jazz violinist Stephane Grappelli at Carnegie Hall. His recording alongside the English Chamber Orchestra of The Four Seasons stayed at the top of the UK classical charts for over a year. He is best known, though, for his diverse pop recordings and experimental music.

Riders On The Storm – The Doors Concerto

A frequent soloist for the esteemed Berlin Philharmonic, Anne-Sophie Mutter was introduced to music when she began playing piano at 5. After graduating to violin, she was very quickly established as a virtuoso and played her first concert with the Berlin Philharmonic at just 13 years old.

She has been a much sought after musician and played under Daniel Barenboim with the English Chamber Orchestra in 1977. As an honorary member of the Royal Academy of Music, she has been head of its international violin studies. She has countless awards and continues to collaborate with her ex-husband, pianist Andre Previn.

A native of Indiana, Joshua Bell started playing violin at just 4 years old. By the age of 14 he had landed a coveted appearance as soloist with the Philadelphia Orchestra. He would make his debut at Carnegie Hall at only 17 and has since toured the world with some of the most important orchestras in the world.

He is a well respected musical academic as well as a constant contributor to film soundtracks, such as The Red Violin. In 2007 he made headlines for playing incognito as a busker in a Washington Subway Station.

Voice of the Violin by Joshua Bell

Japanese born American violinist Midori is one of the most celebrated violinists of modern times. A big inspiration in her playing was her mother, Setsu Goto, who was also a professional violinist. Under her tutelage, Midori began learning violin at the age of three and would give her first public performance at the age of six, playing one of Paganini’s 24 Caprices.

At age eleven she would make her debut with the New York Philharmonic. She continues to teach and play across the world, earning doctorates and teaching positions in many of the top universities.

Hilary Hahn is one of the most exciting players in the field today. She began playing at only 3 years old and made her international debut at 16 with the Budapest Festival Orchestra. A year later, in 1996, she would make her first appearance at Carnegie Hall as a soloist with the Philadelphia Orchestra.

In addition to having played with the major orchestras of the world, she has embraced popular music. She has collaborated with singer-songwriters and experimental composers. She is best known for mastery of Bach’s compositions and has championed classical music performances which allow infants to attend.

Sarah Chang was born to South Korean immigrants Myoung-Jun and Min-Soo Chang in 1980. Both heavily involved in the classical music scene in Philadelphia, Sarah was surrounded from an early age by violin music. She was accepted into the Juilliard School by performing Bruch’s Violin Concerto No 1, at the startlingly young age of 5.

She recorded her first album at only 10 years old and in her teens was playing as many as 150 concerts each year. She has been ranked as one of the Top Eight High Achieving Females in the United States by Newsweek.

Who is your most favorite violinist? Let us know by comment below.