Music is an integral part of the Chinese tradition. For millennia, China has been able to preserve their music tradition by passing the knowledge down from generation to generation. Although ancient, their musical instruments still produce sounds to be reckoned with. The following are some of the top traditional Chinese string instruments.

The Erhu is a traditional Chinese string instrument that has been in existence for over a millennium. The prominence of this bowed musical instrument can still be seen in China to this very day. The Erhu typically consists of 2-strings, 2 tuning pegs, the wood, a bow, the nut and a resonator. The front part of the resonator or the sound box is layered with python skin. The elastic nature of the python skin helps the Erhu to produce its amazing sound.

Currently, with the advancement in technology, some of the erhu resonators are covered with synthetic skin instead of python skin. Although this is a quality alternative, the sound produced is just not as good as one with the python skin. The bow of the Erhu is usually fitted between the 2 strings and is moved in a horizontal manner over the two 2 strings.

The sound produced by the Erhu is almost equivalent to that of a violin but with a higher pitch. This music instrument enables a person to express his/her feelings and mood, from sadness to happiness. The Erhu can be used in solo performances as well as in ensembles.

With nearly two millennia of history to its name, the Pipa is another spectacular traditional Chinese string instrument. It is sometimes referred to as the Chinese lute and is placed in the plucked instrument family. Through the Pipa, we have been able to get a number of related instruments primarily from the East and Southeast Asia. They include: the bipa from Korea, the biwa from Japan and the dan ty ba from Vietnam.

The Pipa is made of 4 strings, 4 tuning pegs, 12 to 26 frets and a wooden body. Among these, the features that make it instantly recognizable are the many number of frets and the body shape that resembles a pear. The Pipa has a selection of popular traditional techniques for the left and right hand used to produce different sounds.

Ruan is sometimes called the Ruanqin especially in Taiwan and is another member of the plucked instrument family as well as a lute. It is made up of a neck, 4 tuning pegs, 4 strings, a wooden body and 24 frets. Ruan is easily noticeable because of its moon-round body. Its strings were originally made using silk but this all changed during the 20th century where ever since steel has been used. The frets are made using ivory or for the modern ones metal. The difference between these two materials is that the latter produces a clearer, louder and higher pitched sound.

This Chinese stringed instrument also comes in a range of sizes. You can go for the soprano, alto, tenor, bass or even the contrabass. 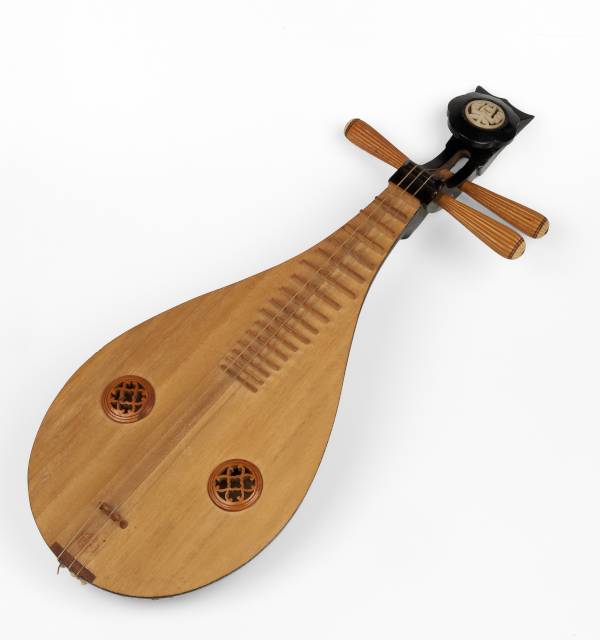 This Chinese string instrument has undergone a number of name changes before arriving to the one we know to this day. Some popular ancient names included Liuyeqin and Tu pipa. It is composed of four strings, around 24 frets and a body shape similar the Pipa. The materials commonly used to make the Liuqin are rosewood, willow wood and the red sandal wood.

Liuqin is not as big as the Ruan or the Pipa but what it lacks in size it replaces with an unrivaled high pitch. The tone produced by this instrument can be termed as penetrating or piercing. Despite the high pitch, the instrument can be played in both orchestras and solo performances. Like the Ruan, Liuqin is played using a pick.

The Guzheng, also known as Zheng, has a history that dates back to over two millennia ago. Some of their first versions were made using silk strings and bamboo frames. Through all those years, the Guzheng has gone through major changes some of which were caused by cultural exchanges among the Asian countries. The strings of the instrument for example kept gradually increasing from five to thirteen and right now twenty one. The Guzheng is considered as the godfather to various Asian stringed instruments such as Koto from Japan, dan tranh from Vietnam, Gayageum from Korea and Yatga from Mongolia.

The Guzheng delivers very strong melodies. It is normally tuned to the five note scale known as the pentatonic scale. It is generally made up of a 64 inch rectangular body composed of a head, soundboard and a tail. Across the sound board, you get 21 strings and 21 bridges. The head is usually closed but can be opened to access the tuning pegs.

To play the Guzheng, it is advisable to wear fingerpicks so that you can be able to generate a louder sound. Only eight fingers are required to play this instrument, four on each side.

Sanxian is a very popular member of the plucking instruments. It comes out as different from its lute counterparts because of its fretless design and its long fingerboard. In general it is composed of three strings, three tuning pegs and a resonator. The resonator is made out of snake skin and is rectangular but with extended curved edges making it look like a circular shape.

This instrument produces a loud and dry tone and comes in a variety of sizes to serve different purposes. The plucking techniques used on it are similar to the Pipa.

Wild Geese On the Sandbank: Sanxian and Ruan Solos 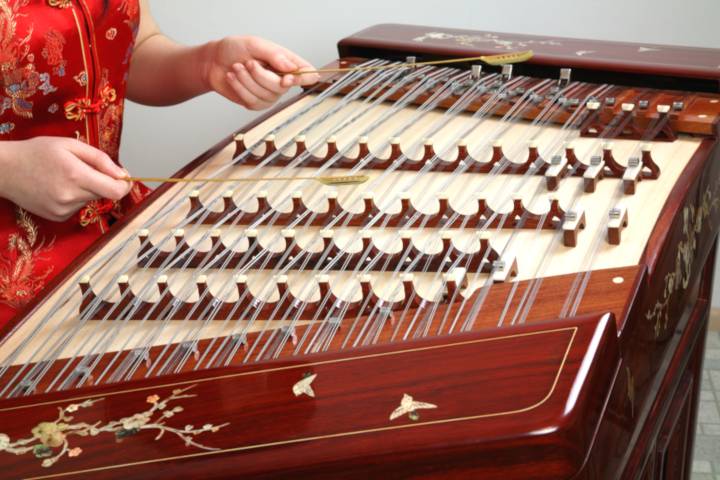 The Yangqin, also called Santur or Cymbalom, became known in China during the 17th century as a result of the Middle East trade. Since then, this stringed instrument has gained a lot of popularity in the country. The instrument usually has a quadrilateral wooden body similar to that of a trapezium. The body is composed of 144 strings and 4 to 5 bridges.

The Yangqin is played by striking the strings using a pair of bamboo beaters or hammers. The bamboo beaters are made of bamboo but have either leather or rubber tips. You hold one on each hand when playing. This instrument produces a crisp and soft sound.

The Guqin is a Chinese stringed instrument that has been used for 3000 years. It was loved and adored by emperors, scholars and court officials. One of the most prominent players of this instrument will have to be Yu Boya. He was an extremely talented musician and a player of lofty mountains and flowing water. During this time the Guqin was just called Qin but this changed by the 20th century.

The Guqin is usually made of a wooden body layered with black lacquer and fitted with seven silk strings. The instrument looks simple but produces some of the best ancient Chinese sounds. It has actually been branded the father of Chinese music by the people there. The Guqin generates a calm and relaxing sound. It is not that loud of an instrument and has a range of between 4 octaves and 2 octaves.

This instrument’s amazing music has gained a lot of recognition and affection from all over the world and this could be seen through the inclusion of flowing water into the Voyager Golden Record. The record aimed to show the diversity and culture of earth to any intelligent extraterrestrial being and was sent to outer space through the Voyager 1 and 2 spacecraft.

If you are looking to connect with the Chinese traditional music then these are some of the best ancient musical instruments you will find. Although some may look similar, each has a distinctive feature that makes them unique.

Listen to the Erhu sound in a concerto: